Music in the time of Henry VIII
Written by Edwin Trout

In 1513 music in England was at a moment of significant change, moving from late fifteenth century models to a new assertiveness under the impetus of a young and recently enthroned King Henry VIII, whose personal enthusiasm for music is well known. 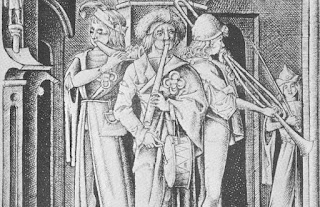 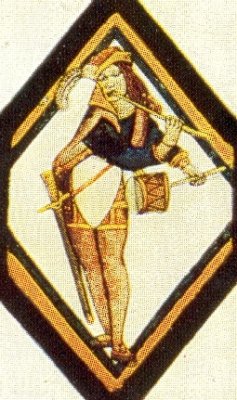 The royal court represented to the apogee of music making in England; Henry employed forceful means to ensure he was supplied with the best musicians the country – by which one really means the church – could provide, and he rewarded talent well. The choir of the Chapel Royal was at the heart of the King’s Musick and a small section accompanied the king on all his travels. In 1526 “when the King is on journies or progresses, only six singing boys and six Gentlemen of the Choir shall make a part of the royal retinue.” In 1520 the choir attended that diplomatic extravaganza, the Field of the Cloth of Gold, under the direction of Robert Fayrfax.

Fayrfax (c1465-1521) and his contemporary William Cornyshe (c1465-1523) were the most prominent of the court composers. Both were Gentlemen of the Chapel Royal, alongside now forgotten musicians of the day: Burton, Farthing and Newarke. In 1513 Fayrfax, who was also organist at St Alban’s Abbey, 1489-1501, was awarded a second doctorate from Oxford. His church music is for five parts, including solo passages, with pieces combining sections block harmony and counterpoint. He also composed secular part-songs that satisfied the taste of the period. Likewise Cornyshe composed secular as well as sacred music, jovial part-songs known as “freemen’s songs”, and music on a grander scale for Henry VIII’s pageants, masques and banquets.

The Great Hall at Hampton Court resounded to music, each course heralded by pipes and drums, and under Henry the masque became more elaborate with “all kinds of music and harmony set forth”. Evolving from the mediaeval tournament, the masque was a pageant interspersed with processions and music, and attended by maskers and mummers in costumes of bright colours and decorated with gold and silver. Henry’s masque for Epiphany at Richmond in 1511 was notable for its display by spectacularly attired morris dancers before the maskers sat down to feast.

The king was a competent musician in his own right. The well-known tune ‘Greensleeves’ was once thought to be his, while those now considered to be his own compositions include:
His ‘Pastyme with good companye’ and ‘Green groweth the holly, so doeth the Ivy’ are characteristic examples of the fashionable freemen’s song in three parts. Cornyshe and Fayrfax died in the early 1520s and so the tenor of music in Henry’s early court changed as new musicians succeeded them. Then, following the break with Rome, the Reformation brought with it new musical requirements.


Towards the Reformation
In 1513 music in England was at a moment of significant change, moving from late fifteenth century models to a new assertiveness under the impetus of a young and recently enthroned King Henry VIII, whose personal enthusiasm for music is well known.
Richard Pyggott, master of Cardinal Wolsey’s chapel in 1518, became a Gentleman of the Chapel Royal in 1524 and, at the same time, Wolsey engaged John Taverner (c1495-1543) as master of the choristers at his new Cardinal College (now Christchurch) in Oxford. His famous mass, ‘Westron Wynd’, is based on a popular song of the same name. And local man Thomas Tusser of Wallingford sang at St Paul’s Cathedral under organist and choirmaster John Redford. Thus by the mid 1520s there emerged a new generation of composers to dominate Tudor music, each of whom was born in the open years of the sixteenth century; Christopher Tye (c.1500-1570) – a member of King’s College Chapel in 1511-12 Thomas Tallis (c.1505-1585) John Merbecke (c.1510-1585) –organists at St George’s Chapel, Windsor; his Communion service is still used today to a process of musical evolution in parallel to that of the dance. The early records of morris dancing emerge in the late fifteenth century and dance first flowered at the royal courts of Henry VII and VIII (and James IV of Scotland). The royal connection with early morris is a vital one. However, the humbler performance under the auspices of the parish church – such as at St Lawrance’s, Reading, in 1513 – drew on more modest traditions.

One or two “minstrels” (as they are usually described in the documentary record) were booked with the dancers and paid per diem; they were not necessarily part of an existing dance troupe. Trumpets, fifes and drums appeared in masques at court, and for the watch processions at which morris dancers often performed, but the usual accompaniment to morris dancing was the simple pipe and tabor.

Bagpipes sometimes featured with the morris dancers later in the sixteenth century, as a madrigal by Thomas Morley suggests with the lines, “Ho! Who comes here all along with bagpiping and drumming / O ‘tis the Morris-dance I see a-coming”. The fiddle didn’t make an appearance until the mid-seventeenth century. As for what music these minstrels played, we do not know; the tunes remain obscure.

John Ward, in his paper ‘The morris tune’ (1987), reviews the surviving published sources and considers the music for early morris dancing was a family of related tunes, from which he suggests an original source subsequently divided and was extended to by the addition of unrelated melodies, of which the country dance was the most widespread source later in the sixteenth century. Examples of the country-dance tunes used for morris dancing include ‘Trip and Go’ (1591) and ‘The Flowers in May’ (1621). Conversely the morris ‘label’ became attached to country-dances such as ‘Stane’s Morris’ in John Playford’s English Dancing Master (1651).

However Ward’s theory is contested, and perhaps now discredited. One of the first tunes explicitly associated with notated morris steps appears in Arbeau’s Orchesography of 1589, recalling the music of the author’s youth of, say, the 1540s. In this book, the pretext is that of the author addressing a fictitious boy, named Capriol, to teach him the techniques of dance.


While we have drawn on the stepping recorded by Arbeau, we have gone further back for the music. 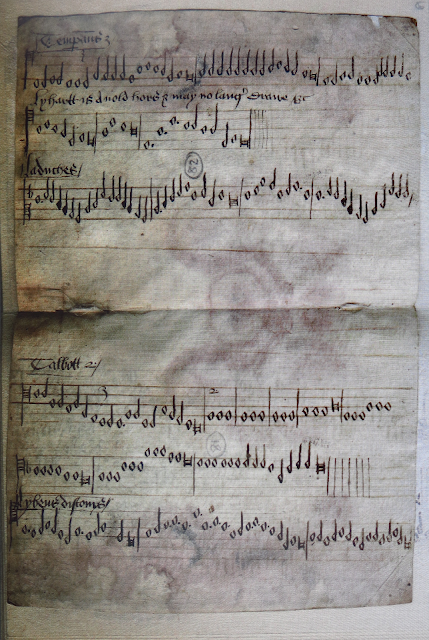 We have taken tunes from the Gresley manuscript (above) for our reconstruction – they are roughly contemporary, dating from the final quarter of the fifteenth century – and the tunes are clearly associated with their respective dance steps:
It is not clear in what style these steps and tunes were performed, but we have taken them as providing an authentic vocabulary of dance with which to construct our conjecture.